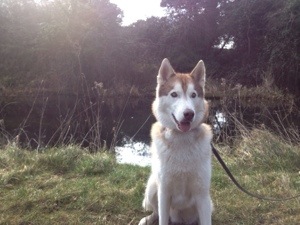 A few days rest had me spooked ,demons of doubt had crept in and the ultra challenge I’ve undertaken had begun to overwhelm…I needed to get this run done!.
I met the Husky at mile 12…. I was glad to have a pause..(paws..)As it turns out his owner was an ironman …. I discussed my third swimming class with him , we both acknowledged that running may well be the way forward for me…I say that but I won’t give up just yet..not being a natural athlete hasn’t stopped me yet!..
The plan on Saturday was just to get the time on road…I’ve really struggled releasing my desire to stay within modest pb marathon times of approximately 8 minute miles into the reality of ultra marathons …so I decided to just go with a time in mind…. I aimed at a four hour stint…. A misjudgement in route made it five….

I switched canal from the Royal to the grand….. Or is it the other way round…Every now and then the canal throws up a window into its history…this old bridge now leads nowhere… Only stone walls and grass indicate once life pivoted around this now ghostly path
Running can be a lonely place , there’s nowhere to hide even when you’re miles often literally from anyone!.
I was glad to meet this next giant

What a beauty….
A lack of planning and a hint of sadism left me with one large hill to master before home…. The hill won but I was satisfied that I’m back on track.
29 miles done ..5 hours…followed by 6 in 48 Sunday…