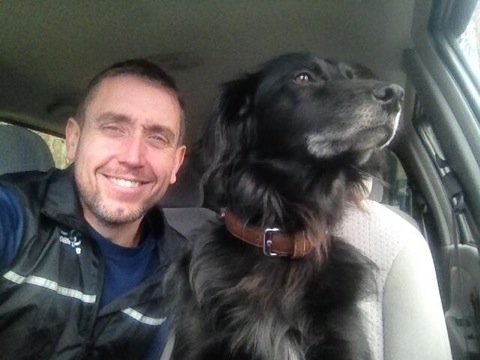 Sometimes what your looking for is right in front of you…or in this case on Twitter…Today’s contribution is via http://ordinarytrailrunner.com/&#8230;.
It’s everything that in creating this blog I hoped to encapsulate..

It could’ve been a classic film but that was how we met Maggie (we
named her after a character in Northern Exposure, possibly the best TV
of the ’90s). We were visiting family and en route to our NYE party in
the wilds of Belmullet we just happened to be walking on Salthill
promenade and hey presto Maggie ended up with us in our old Honda
civic, living it up for New Year’s in Mayo and then finding a home
with us first in Dublin and then in the Wicklow uplands.

In Dublin she had the usual deal, runs on the beach, those cold, wet,
windy trots around some bald patch of suburban green space near the
house but she came into her own in the mountains, in the ferns and in
the heather and tearing off across the scree. For a mixed breed of
dubious heritage she’s an extraordinary running partner with a sense
of direction including on never-visited-before terrain that I still
can’t figure out. Look to ordinarytrailrunner.com and you can see how
she cut over 1km off my route finding Lough Firrib or got me up and
down Tonelegee when I had been ‘navigating’ in totally the wrong
direction. Sometimes for the hell of it I tell her to lead on across
the bog or scree and follow just to see where we’ll end up. Apart from
having to drag her out of a bog hole somewhere between Camaderry and
Mullacor she’s well up on me in the brownie points for services to
your running partner. Lead on Maggie!